The City of Brea honors its veterans, active and retired military personnel for their service to our country. In return for their sacrifices, the City looks for opportunities to provide recognition and assistance.
Brea War Memorial 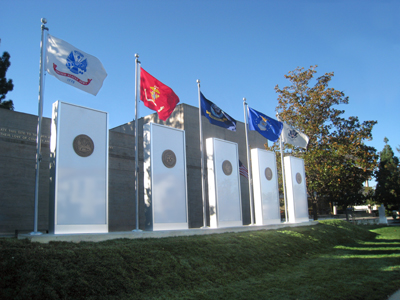 The Brea War Memorial is located at the Brea Civic and Cultural Center and honors those men and women of Brea who sacrificed their lives for our freedom. The Walk of Honor path leads up to the memorial's focal point and is inscribed with names of veterans, both living and deceased, retired and active military personnel. The Walk of Honor is an ongoing Brea community effort—a lasting tribute to the men and women who have defended their country in war and peace.

My HealtheVet offers tips and tools to help veterans effectively work with their health care team to manage their health. The site's support tools will help maximize the benefit of My HealtheVet to support informed decisions.

Brea’s Family Resource Center is proud to host the Orange County Veterans Service Office to aid our community’s veterans. The O.C. County Veterans Service Office actively pursues the rights of veterans and dependents of the United States Armed Forces to receive Department of Veterans Affairs benefits. Through local and national collaboration, we will work to assure that veterans and their dependents receive the entitlements they have earned for their military service.

Free Services include: Benefit claims counseling & Information referral assistance. Call for an appointment: (714) 990-7150. Assistance is available the third Wednesday of each month from 9:30 a.m. to 3 p.m.

Memory Garden's "Avenue of the Flags"

Memory Garden's first "Avenue of the Flags" memorial on May 30, 1958 displayed six flags. Today there are over 1,200 full size burial flags flown each Memorial Day and Veterans Day. Each one of these flags was given by a grateful nation to the family of a Veteran at the time of his or her passing. The grave of each Veteran interred in the cemetery is also be decorated with a white cross and a miniature flag.

Recognize the brave men and women who are serving in the Armed Forces through the Military Banner Program. Located on Central Avenue and sponsored by the VFW, this banner program honors the sons and daughters of Brea. 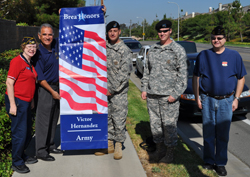 The O.C. County Veterans Service Office actively pursues the rights of veterans and dependents of the United States Armed Forces to receive Department of Veterans Affairs benefits. The agency works collaboratively with nationally chartered veterans organizations, the Department of Veterans Affairs and others to assure that veterans and their dependents receive the entitlements they have earned for their military service.

The City Council proclaimed Brea a Red Shirt Friday in March, 2013 to encourage residents to show their support for military members by wearing red shirts on Fridays throughout the year. Long-sleeved, short-sleeved, collared, t-shirts, stripes or solids, don your red shirts and together we can show our support and say thank you for those who currently serve. Red Shirt Friday is a small but growing grassroots effort in the United States to honor service members in the Armed Forces who are actively deployed overseas. Red Shirt Friday has been adopted by local governments, community groups and private businesses across the nation.

Veterans meet every Monday at the Senior Center from 11-11:45 A.M. Join veterans from all eras in a friendly, casual atmosphere. The Senior Center is located at 500 Sievers Avenue. Call (714) 990-7750 for information.

Every Veterans Day, the City of Brea hosts a ceremony honoring America’s veterans, active and retired military personnel. The event is held at the site of the Brea War Memorial located at the Brea Civic & Cultural Center. Information will be posted on this website by October regarding details each year’s event.