The Brea Energy Efficiency and Solar Project is online conserving energy and producing General Fund and Water Fund Savings. There is a positive cash flow from year one with more than $13 million in net savings anticipated to be realized over 25 years. 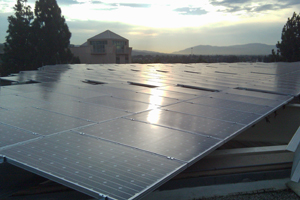 Thanks to City Council leadership, Brea has taken an important step in energy conservation and creating a more sustainable future for generations. The city has gone well beyond all prior efforts to be environmentally responsible with this initiative.

This video provides an overview of the project.

The Brea Energy Efficiency and Solar Power Project encompassed detailed energy efficiency improvements at 14 different civic sites, plus replacement of street lighting throughout the city and installation of three new solar power production arrays that supply direct energy for operations. This project makes Brea one of the largest municipal producers of solar energy in Orange County.

At the Brea Civic and Cultural Center the roof provided a good foundation for the installation of the photovoltaic panels. Additionally, a large canopy of panels extended over the open outdoor plaza adding welcome shade and enhancing the modern architectural style of the building. Most importantly, these help power diverse city operations underway within the structure. 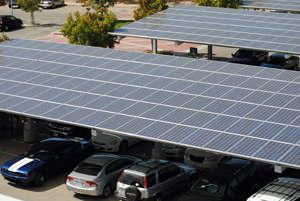 Over at the Brea Community Center, 19 new energy efficient air conditioning units were installed to replace well-used equipment that had been in service since the building was first occupied. Solar arrays were then added to the roof, plus three tiers were built over the main parking lot. These supported additional solar arrays and created attractive new parking slots for patrons who enjoy comfortable shade during the day and better night lighting. Neighbors appreciated that the new structures allow for lower mounting of lights and thus less spillover effect at night.

The third and largest, but least visible, solar array was built out over the water reservoir in the city's public works yard. These panels will directly power a set of water pumps that consume large amounts of energy to distribute water throughout the system. While it is behind the scenes, this component of the overall energy project will result in significant utility cost controls to the water fund even as commodity and infrastructure prices rise.

Yet another very important project component was citywide conversion of street lights. Over 4,000 fixtures were replaced or retrofitted. Along public thoroughfares, the old high pressure sodium cobra head lamps were exchanged for energy efficient induction lights. 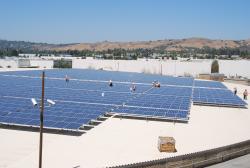 In large residential tracts a variety of custom style street lamps using old technologies were replicated so that homeowner associations will also benefit from lower electrical bills in the future. Comments from both public safety responders and the public have been very favorable about the improved lighting quality that has also been realized through this aspect of the overall project.

Interior lighting retrofits were the earliest portion of the project. Encompassing all fire stations, Pioneer Hall, the Senior Center, the Plunge, Lions Scout Center, City Yard, and both downtown parking structures, these retrofits had an immediate effect in reducing electrical consumption even while the solar construction was ongoing. Existing fixtures at all these locations were retrofitted with more energy efficient bulbs and ballasts. Motion sensors were added and induction and LED technology were incorporated as appropriate. By taking early action, the city was able to qualify for incentive rebates that helped offset costs. This also helped shorten the payback period as financial considerations were taken into account.

Brea is now online as an energy producer. Much was learned in partnership with Chevron Energy Solutions (CES), the company selected to design and build the overall project. CES engineers worked closely at each step to integrate equipment with the Southern California Edison system, to assist manufacturers in adapting old fixtures to newer technologies, and to devise streamlined installation methods with contractors. The project was delivered on time and on budget. 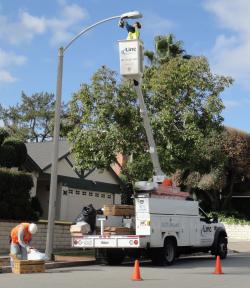 As the savings mount, the city also becomes a leader in energy efficiency. This will lead to other environmentally responsible initiatives as Brea continues to wisely manage resources while providing a high quality of life.

Read an overview of the project and learn about how solar energy works and the benefits of this project. You can see actual production data from the three Brea solar sites where electrical energy is being generated. View a live feed that refreshes every 15 minutes during the day.

Here are additional topical notes about various aspects of the project.