Brea like many other California cities, is working to mitigate the increase in pension costs resulting from several economic factors. The Pension Ad Hoc Subcommittee, consists of Mayor Hupp, and Mayor Pro Tem Parker and was formed by the Brea City Council to explore possibilities of reducing the City’s pension liabilities. The cost of pension obligations has become more expensive over the years as people are living longer thus increasing and extending payment obligations.

Please let us know your thoughts/suggestions regarding pension at the bottom of this page. We appreciate your participation.

How Did Cities Get Here? 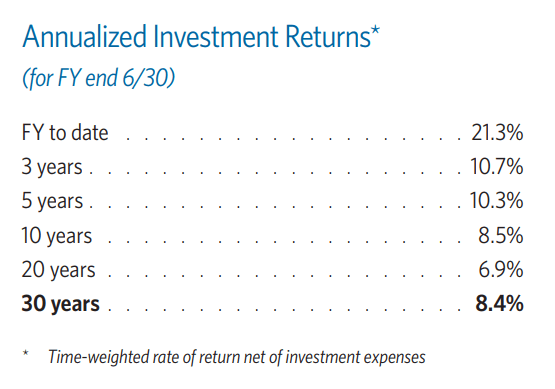 How Are CalPERS Benefits Funded?

The largest contribution to fund CalPERS benefits comes from investment dollars.   The below CalPERS Pension Buck illustrates the sources of income that fund public employee pensions.  Based on data over the past 20 years ending June 30, 2020, for every dollar CALPERS pays in pension:

In other words, 71 cents out of every public employee pension dollar is funded by CalPERS' own investment earnings and member contributions. In the fiscal year ended June 2021, CalPERS paid out nearly $ 27.4 billion in pension benefits.

Actuarial Report – An actuarial valuation is a type of appraisal which requires making economic and demographic assumptions in order to estimate future liabilities. The assumptions are typically based on a mix of statistical studies and experienced judgment.

California Rule – The California Rule is the result of a 1955 court case (Allen v. City of Long Beach) that concludes that an employee’s pension benefit as of the date of hire constitutes a contractual obligation. The California Supreme Court ruled that “Changes in a pension plan which result in a disadvantage to employees should be accompanied by comparable new advantages”. The 1955 ruling is currently being contested.

Defined Benefit Plan (DBP) – A type of pension plan in which an employer/sponsor promises a specified monthly benefit upon retirement that is predetermined by a formula based on the employee's earnings history, tenure of service and age.

Defined Contribution Plan (DCP) – A type of retirement plan in which a certain amount or percentage of money is set aside each year by a company (or employee) for the benefit of each of its employees. Benefits directly depend upon individual investment returns.

Employee Contribution – The portion of normal cost required to be paid by the employee, subject to the local agencies negotiated memorandums of understanding with applicable employee groups.

Employer Contribution – The portion of normal cost required to be paid by the employer, determined by periodic actuarial valuations under state law and based on the agency’s benefit formulas and employee groups covered.

Funded Ratio - Percentage of assets available today to pay all of the pension benefits promised to employees.

Normal Costs – The annual cost of service accrual for the upcoming fiscal year for active employees. The normal cost should be view as the long-term contribution rate for existing employees.

PEPRA - Public Employees’ Pension Reform Act of 2013 – A pension reform bill that went into effect January 1, 2013. The bill impacts new public employees and establishes a limit on the amount of compensation that can be used to calculate a retirement benefit.

Unfunded Accrued Liability (UAL) – Portion of the plan’s unfunded liability that is not funded by the plan’s asset value.

The table below illustrates the City’s combined (safety and miscellaneous) Unfunded Accrued Liability (UAL) in comparison to the CalPERS projected payroll assumptions and total projected employer costs for the City of Brea for the next 30 years.  Information provided is based upon the June 30, 2020 actuarial reports and the assumptions used to identify the City’s UAL amount.  Assumptions include a 7% annual investment return, payroll growth of 2.75%, and inflation rate of 2.5%.

The table below illustrates the City’s projected combined (safety and miscellaneous) employer contribution rates for the next 30 years.  Information provided is based upon the June 30, 2020 actuarial reports and the assumptions used to identify the projected employer contribution amount. Assumptions include a 7% annual investment return, payroll growth of 2.75%, and inflation rate of 2.5%. 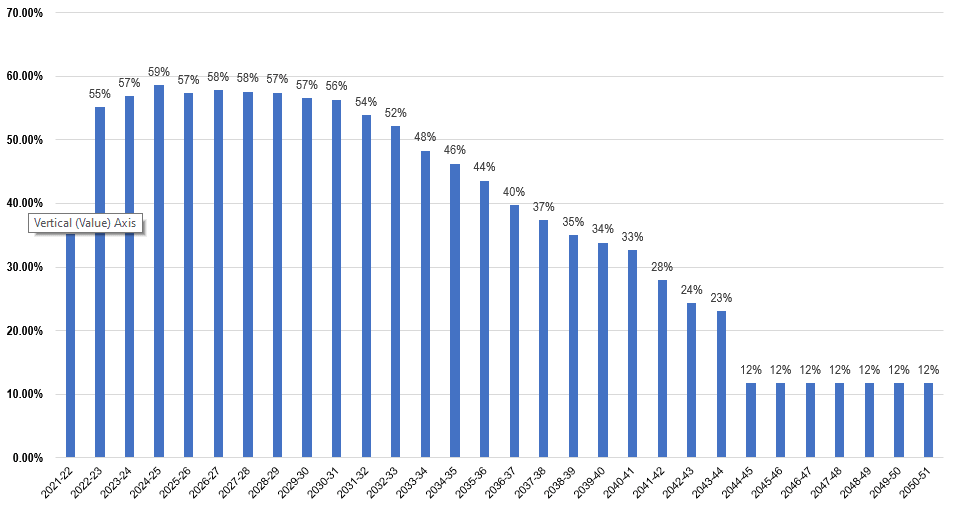 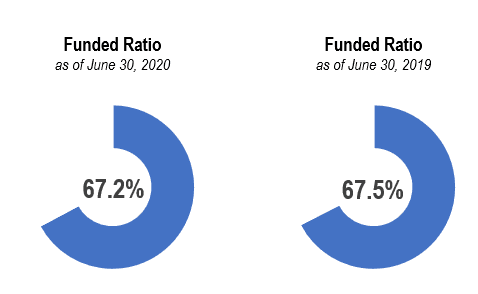 The City currently provides Other Post-Employment Benefits (OPEB) to eligible retired employees to assist with the monthly cost of medical premiums, up to $335 a month.  This does not include pension benefits paid to the retiree.  Based on the June 30, 2020, Actuarial Valuation, the City’s OPEB UAL obligation was $30.2 million.

To mitigate the longer-term impacts, the City established an OPEB Fund (Fund 150) as well as an Irrevocable Trust with Public Agency Retirement Services (PARS).  This Trust provides a mechanism for the City to pre-fund a portion of its unfunded OPEB actuarial liabilities.  The Brea City Council is currently exploring option(s) to contribute to this Trust in the future.

In addition, the City has negotiated with employee bargaining units to reduce the OPEB benefits for new employees to the Public Employees’ Medical & Hospital Care Act (PEMHCA) minimum amount.  This will provide long-term assistance in reducing the City’s OPEB obligations.